Michel Aubineau (1921-2002) remarked once that the number of Greek manuscripts which contain works attributed to John Chrysostom surpasses that of any other Church Father.[1] As far as our evidence goes, the same must have been true of the Coptic manuscripts, for there are over sixty literary pieces attributed to Chrysostom in Sahidic and Bohairic dialects. 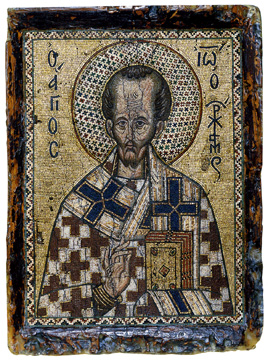 Numerous translations of Golden Mouth’s works in Coptic are recorded by the Clavis Patrum Graecorum, but there is still much to be done regarding the outlines of his literary corpus in the vernacular language of Christian Egypt. Hereby I would like to show that the Coptic dossier of John Chrysostom can be enriched with a Sahidic fragment from one of his homilies on the Epistle to the Romans (CPG 4427).

The fragment in question is the first Coptic witness of these homilies and, together with the versions in the same language of the sermons on Matthew, John, Hebrews and so on, show that the Coptic monks were much interested in the exegetical works of John Chrysostom.

The Greek text of the thirty-two homilies on Romans is printed in vol. 60 of Migne’s Patrologia Graeca (coll. 391-682). According to the Sources chrétiennes website, François Papillon prepares the edition of these sermons for the renowned French collection. An English translation is readily accessible in vol. 11 of Nicene and Post-Nicene Fathers (NPNF), which is available also on-line, on the Christian Classics Ethereal Library’s website.

Besides Greek, Chrysostom’s homilies on Romans are also known in Armenian, Syriac, Arabic[2] and Old Slavonic.[3] As for Coptic, the fragment which I mentioned above belongs to the seventh homily and the text corresponds to columns 447-448 in volume 60 of Patrologia Graeca. It is written on parchment in the Sahidic dialect of Coptic and is kept today in the Rijksmuseum van Oudheden in Leiden under the inventory number F1976/4.2. The fragment belonged to a codex, but as it is the only one identified thus far, it is impossible to say if the manuscript contained the entire collection of the homilies on Romans or just a selection.

This leaf is not mentioned in the 1897 catalogue of the Coptic manuscripts in Leiden, compiled by Pleyte and Boeser,[4] because it had not been integrated to the collection of the Rijksmuseum until 1976, when it was sold to this institution by the Dutch antiquity dealer Karl Johannes Möger. According to the information supplied to me by the staff, the museum made numerous acquisitions from the same dealer between 1959 and 1984.

Möger played a significant role in the trajectory of Coptic manuscripts from Egypt to the Western collections after World War II. He was, perhaps, the most important dealer of Egyptian antiquities after Maurice Nahman. Among the notable manuscripts that went through Möger’s hands are some of the Michaelides papyri (the Leiden lot), the “Gospel” of the Savior (Berlin, P. Berol. 22220), and an unpublished codex of the Acts of the Apostles in Sahidic (New York, Pierpont Morgan M 910).

Due to Karl J. Möger’s significant role in the development of our Coptic collections, I would like to know more about his personality, whether he is still alive, and if he recorded data on the provenance of the pertinent manuscripts. Perhaps somebody has further details about him.

I am a researcher at the Göttingen Academy of Sciences and Humanities. I write mostly on Coptic literature, Patristics, and apocryphal texts.
View all posts by Alin Suciu →
This entry was posted in John Chrysostom, Patristics and tagged Coptic Manuscripts, Homilies on the Epistle to the Romans, John Chrysostom, Leiden, Patristics. Bookmark the permalink.