The Identification of the Coptic Fragments Auctioned at Sotheby’s

Sotheby’s auctioned recently ten Coptic parchment fragments which were purchased for 28,750 GBP. Surprisingly, in the only picture available thus far can be recognized a portion from Cyril of Alexandria’s Scholia on the Incarnation of Monogenes, an important dogmatic work written in the first half of the 5th century.

The Sotheby’s fragments evidently come from the White Monastery (situated near ancient Panopolis), and they are not the only bits which survived from this codex. My preliminary report on the fragments can be found here. 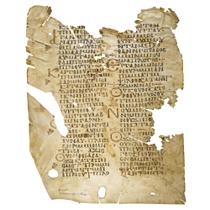 SERMONS, IN COPTIC (SAHIDIC DIALECT), ON VELLUM, FRAGMENTS FROM A LARGE DECORATED MANUSCRIPT
[Upper Egypt (most probably the White Monastery, in the province of Akhmim), ninth century AD.]

10 fragments of varying sizes: (1) a near complete leaf, 335mm. by 261mm.; (2) (3) & (7) substantial fragments of leaves approximately 240mm. wide, (4) & (6) large sections of single columns; the remainder small pieces approximately 60mm. across; written space of (1) 255mm. by 165mm, double column, with 31 lines in black ink, capitals within the text touched in red, those beginning significant sections with clubs at the end of their terminals, dots within their bodies and outlined in red, vellum dry and brittle in places, many tears to outer edges of leaves, but in good and presentable condition