While checking a number of unidentified Coptic fragments in the Bodleian Library, Oxford, my attention was drawn by a dismembered parchment leaf (call number MS.Copt.e. 170[P]) copied on one column by a skilled and elegant hand. 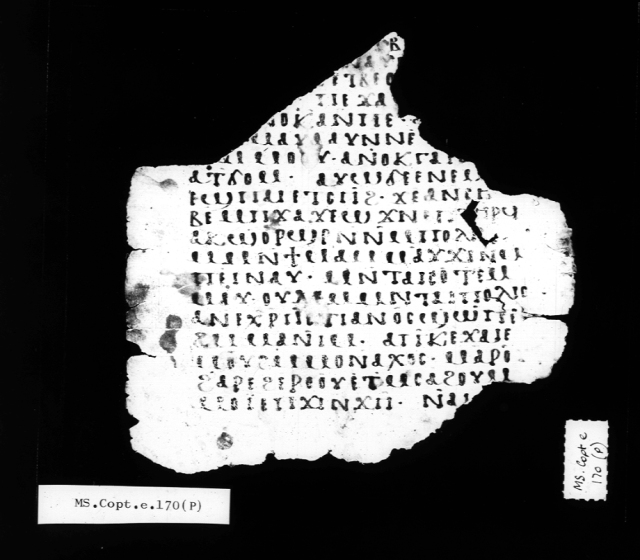 The text utilizes the first person singular to recount the debate between an unnamed monk and the Devil. As I was reading the Coptic text, I came across a sentence that sounded familiar: “the Christians are everywhere, and also the desert is full of monks.” This reminded me Athanasius’ famous quote “the desert was made a city by monks, whose citizenship was that of heaven” (Life of Anthony 14), which inspired the title of Derwas Chitty’s excellent book The Desert a City: An Introduction to the Study of Egyptian and Palestinian Monasticism Under the Christian Empire (Oxford 1966). I checked Bartelink’s edition of the Life of Antony and the fragment in question corresponds precisely to the end of § 40 and the beginning of § 41 (pages 244-248 in Sources Chrétiennes, no. 400). We have thus a previously unnoticed Coptic fragment from this work concerning ancient monasticism.

The Sahidic version of the Life of Anthony was published in 1949 by Gérard Garitte (S. Antonii vitae: Versio sahidica 2 vols. [CSCO, 117-118. Scriptores coptici, 13-14; Paris: E. Typographeo Reipublicae, 1949]) and is represented in several manuscripts. The only complete text of the Life is found in codex M 579, which comes from the Monastery of the Archangel Michael in the Fayyum (Hamouli), but is kept today in the Pierpont Morgan Library, New York. In addition to the Hamouli manuscript, the text survived in four fragmentary codices from the White Monastery, situated in Upper Egypt, near Sohag. Their remains are scattered today among several collections.

The paleographical inspection shows that the new Coptic fragment was dismembered from Garitte’s “Codex A.” Apparently five other fragments have survived from this manuscript, which has the siglum MONB.AH in the Corpus dei manoscritti copti letterari database. Four fragments are in the British Library and one in Bibliothèque Nationale in Paris. The fragment in the Bodleian Library must be placed somewhere in the lacuna between London BL Or. 3581B, f. 34 and Paris Bibliothèque Nationale 1315, f. 93.

As far as I am aware, this is the first Coptic fragment from the Life of Anthony which came to light after 1949, the year when Garitte published his CSCO edition. Here is a tentative translation of the Oxford fragment (the transcription can be checked here).

(40) …you will learn not to be discouraged in the ascetical practice and not to fear the apparitions of the Devil and of his demons. (41) Since, while saying these I became like those who are senseless, accept this other one (i.e. discourse) for fearlessness and believe that I am not lying. He (i.e. the Devil) knocked one day at the door of my cell and when I went out I saw someone who appeared as large and tall. I asked him, “Who are you?” He said, “I am Satan.” I told him, “What are you doing in this place?” The miserable said, “Why do the monks and the Christians blame me without reason? Why do they always curse me?” I told him, “Why do you trouble them?” He said, “It is not me, but they trouble themselves alone for I became powerless. And have you not read this that is written: ‘The swords of the enemy were destroyed completely; you have demolished the cities’ (Ps 9:7)? I have no place from now on, I have no weapon nor city. The Christians are everywhere, and also the desert is full of monks. Let them guard themselves (and) not curse me without reason.” And these… (the text breaks off at this point)

I am a researcher at the Göttingen Academy of Sciences and Humanities. I write mostly on Coptic literature, Patristics, and apocryphal texts.
View all posts by Alin Suciu →
This entry was posted in Anthony the Great, Ascetic Authors, Athanasius of Alexandria, Patristics and tagged Alin Suciu, Athanasius of Alexandria, Bodleian Library, Coptic Manuscripts, Egyptian monasticism, Life of Antony, Oxford, Patristics, White Monastery. Bookmark the permalink.