A Leiden Manuscript Containing the Apocryphal Names of the Two Thieves

Among the unidentified Coptic literary manuscripts deposited in the collection of the Rijksmuseum van Oudheden in Leiden, there are two parchment fragments that bear the inventory number F 1976/4.31. According to the museum acquisition book, the items were purchased in 1976 together with other Coptic fragments from the Dutch antiquity dealer Johannes Möger. In the same lot of manuscripts was a fragment from John Chrysostom’s Homilies on the Epistle to the Romans, which I identified in a previous post.

To the best of my knowledge, the two fragments inventoried as F 1976/4.31 were neither identified, nor discussed yet in any scholarly publication. That’s what I’ll try to do in the following lines.

The page numbers [103]-104 and [105]-106 are still visible on the parchment, showing that the fragments come from two consecutive leaves of a larger codex. 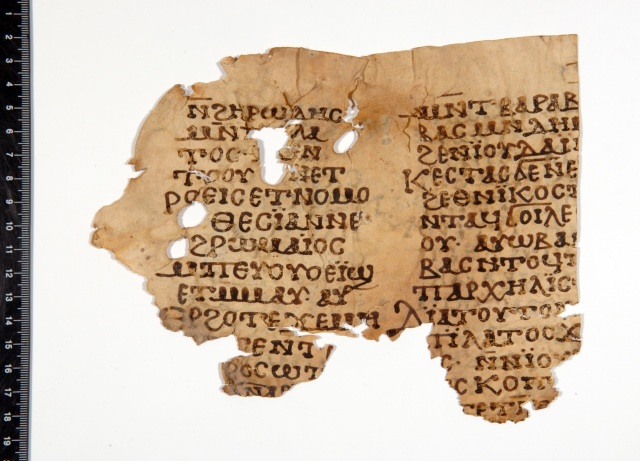 The text is a development of the Crucifixion scene, in which the author introduced elements taken, directly or through an intermediary, from the Acts of Pilate. Here is a tentative translation of the text, which is not easy to read due to the fragmentary state:

(p. 103) […] Ruth the Moabite thus: ‘Soak your piece (of bread) in this vinegar.’ Since the Holy Spirit knows that Christ comes from Ruth, he started by saying this word through the mouth of Boaz. …several lines are missing… […] to talk about them. One of them was a Jew, and the other was a Gentile. And when the Jew saw that his nation hated Christ very much and that the one who will accuse him […] …several lines are missing… (p. 104) ‘[…] him, they will release me from the Cross.’ Indeed, the Jew and the Gentile they both blasphemed him before the signs appeared, according to the way that Matthew said …several lines are missing… ‘[…] this that they crucified with me is truly the Son of God.’ And immediately he repented for what he said (before).

Although the occurrence of the two thieves’ names can make us think that we are reading an apocryphal writing, the text can be in fact identified as a portion from the Coptic homily on the Passion and Resurrection of Christ (clavis coptica 0149), attributed to Evodius of Rome.[1] About this fictitious author I have already written in another post. Suffice here to say that Evodius is mentioned by Eusebius of Caesarea in his Ecclesiastical History (3.22) as being a disciple of the apostle Peter and the predecessor of Ignatius on the Episcopal See of Antioch.[2] His name occurs sometimes in the list of the seventy (or seventy-two) disciples of Jesus.[3] Thus, the narrative translated above claims to be a first-hand report on the Passion of Christ, recounted by an eye-witness.

One detail is particularly noteworthy in pseudo-Evodius’ story. The names of the two thieves crucified with Jesus are reversed, Demas being the thief on the left, while the repentant one is called Kestas. This goes against the majority of the sources we know, in which the Good Thief is Dysmas, Gestas being the one who mocks Jesus.[4] That’s what we read, for example, in the Acts of Pilate (9; 10, 1-2):[5]

And one of the malefactors that were hanged [by name Gestas] spake unto him, saying: If thou be the Christ, save thyself, and us. But Dysmas answering rebuked him, saying: Dost thou not at all fear God, seeing thou art in the same condemnation? and we indeed justly, for we receive the due reward of our deeds; but this man hath done nothing amiss. And he said unto Jesus: Remember me, Lord, in thy kingdom. And Jesus said unto him: Verily, verily, I say unto thee, that today thou shalt be (art) with me in paradise.

Seven days before the passion of Christ, two condemned robbers were sent from Jericho to Pilate, whose crimes were these.

The first, Gestas, used to strip and murder wayfarers, hang up women by the feet and cut off their breasts, drink the blood of babes : he knew not God nor obeyed any law, but was violent from the beginning.

The other, Demas, was a Galilaean who kept an inn; he despoiled the rich but did good to the poor, even burying them, like Tobit. He had committed robberies on the Jews, for he stole (plundered) the law itself at Jerusalem, and stripped the daughter of Caiaphas, who was a priestess of the sanctuary, and he took away even the mystic deposit of Solomon which had been deposited in the (holy) place.

They did many evil things to Jesus that night, and on the dawn of Friday delivered him to Pilate. He was condemned and crucified with the two robbers, Gestas on the left, Demas on the right.

This is not we find in our Coptic text. However, pseudo-Evodius is not the only author who reverses the names of the two thieves. For example, a similar reversal occurs in two out of the four manuscripts which we know from a Coptic homily on the Cross attributed to Theophilus of Alexandria.[7] Hans Förster published recently, without identification, one of these testimonies.[8] The following quotation is taken from a still unedited fragment of pseudo-Theophilus, which is kept today in the National Library in Paris:

They have crucified him with two thieves. One of them, this being Demas, who was not worthy of his Godhead, said to the Lord mocking him: “If you are the Christ, save yourself and save us too!” The other one answered, this being Kestes, rebuking him with fury: “Don’t you fear the Living God? For we are receiving according to the merit of  the sins that we have done but this one has not done any sin.” (BnF Copte 1313, f. 40v, lines 18-47)

It is nevertheless interesting to see how these Coptic writings document a different tradition concerning the names of the two thieves, a tradition which is worth studying more carefully.

[2] On the other hand, a little bit further in the same book (3.36.2), Eusebius says that the first successor of Peter was Ignatius. On these two contrasting traditions, see G. Downey, A History of Antioch in Syria from Seleucus to Arab Conquest (Princeton, NJ: Princeton University Press, 1961) 284ff.

[4] For a survey of the most relevant sources, see B. M. Metzger, “Names for the Nameless in the New Testament: A Study in the Growth of Christian Tradition,” in P. Granfield & J. A. Jungmann (eds.), Kyriakon. Festschrift Johannes Quasten (Münster: Aschendorff, 1970) 79-99, and reprinted (with an appendix) in Idem, New Testament Studies: Philological, Versional, and Patristic (Leiden: E. J. Brill, 1980) 23-45.

I am a researcher at the Göttingen Academy of Sciences and Humanities. I write mostly on Coptic literature, Patristics, and apocryphal texts.
View all posts by Alin Suciu →
This entry was posted in Apocrypha, Evodius of Rome and tagged Alin Suciu, apocrypha, Coptic literature, Coptic Manuscripts, Early Christianity, Evodius, Leiden, Rijksmuseum van Oudheden, Two Thieves. Bookmark the permalink.