Pennsylvania University Museum E 16310 is a parchment fragment which consists of the upper part of a codex leaf. As can be seen in the pictures below, a stub from the conjoint leaf also survives. The quire ornaments and signatures, which occur in the top margin of both leaves’ flesh side, (see Photo 1) indicate that these vestiges originally formed the outermost bifolio of a quire. Unfortunately, the ink of the signature and page numbers has faded away, making it impossible to situate with any precision the positioning of the fragment in the original manuscript. 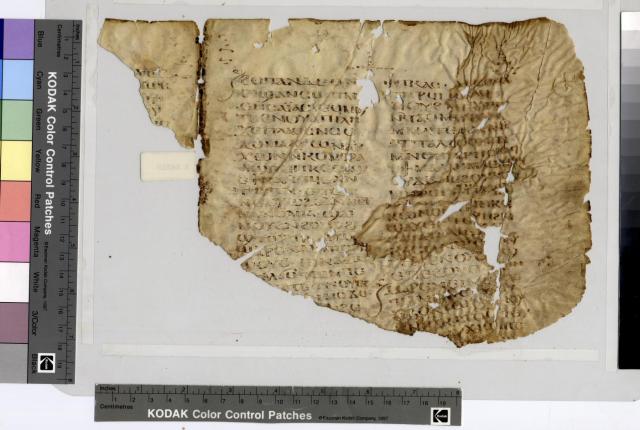 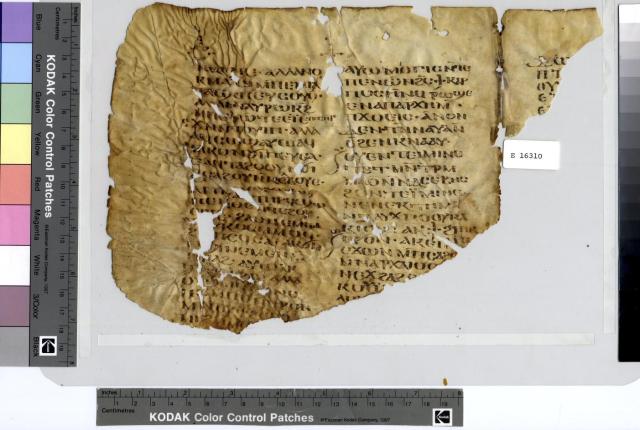 A photographic reproduction of the verso of E 16310 was included in an article published by John R. Abercrombie in an issue of Expedition (Winter 1978). The text which accompanies the photograph describes the fragment as part of a “Coptic homily on Isaiah I.” On the webpage Papyri and Related Materials at the University of Pennsylvania, Robert A. Kraft noted, with much hesitation, that the fragment might belong to the works of Shenoute.

In fact, E 16310 contains a portion from the Coptic version of the 16th Oration of St. Gregory of Nazianzus. This homily was delivered in 373 A.D. following the incidence of a series of natural disasters which had befallen the town of Nazianzus. As his father, who was the priest of the local parish, was unable to find an explanation as to why God had allowed these misfortunes to occur, Gregory was the one who delivered the sermon. Because of his father’s silence, Gregory’s 16th oration came to be known as In patrem tacentem. The discourse is, perhaps, one of the most beautiful Patristic pieces on the spiritual meaning of human misery.

The Pennsylvania fragment E 16310 is the first attestation of the 16th Oration of Gregory the Theologian in Coptic. The incipit “For when I hear Isaiah reprimanding the people of Sodom and rulers of Gomorrah: ‘Why should you be smitten anymore, adding to your transgression?,’ I am filled with fear and tremble…,” parallels the Greek Ἡσαΐου μὲν γὰρ ὅταν ἀκούσω, τῷ λαῷ Σοδόμων καὶ τοῖς ἄρχουσι Γομόῤῥας ἀπειλοῦντος, καὶ λέγοντος· Τί ἔτι πληγῆτε, προστιθέντες ἀνομίαν; μικροῦ καὶ φρίκης πληροῦμαι. The Pennsylvania fragment ends with the words “you brought upon us the ancient curse: throw much and bring little,” which is a variant reading for the Greek ὡς ἡ παλαιὰ κατάρα, πλείονα, καὶ εἰσενεγκεῖν ὀλίγα (PG vol. 35, col. 956-957).

I think it is important for the future editor(s) of the 16th Oration to further take into consideration the variae lectiones of this fragment. Previously, Guy Lafontaine was charged with studying the Coptic translations from Gregory of Nazianzus for a larger project which was supposed to offer the critical edition of the Greek text of his works in comparison to the versions in various Eastern languages. The project was carried out by the Catholic University in Louvain. Amongst Father Lafontaine’s accomplishments, we can count several editions, including his report concerning Gregory’s works preserved in Coptic.[1] Besides this there is also the Sources chrétiennes edition of Orat. 21 which uses his translation of the Bohairic version of this sermon. I am uncertain as to whether Father Lafontaine’s project was taken over by someone else after his death. Does anybody else know more about this?