On June 29, I will be presenting a paper at the Association pour l’étude de la littérature apocryphe chrétienne (AELAC) meeting, which shall take place in Dole, France. You can find below the complete program of the conference and the abstract of my paper. 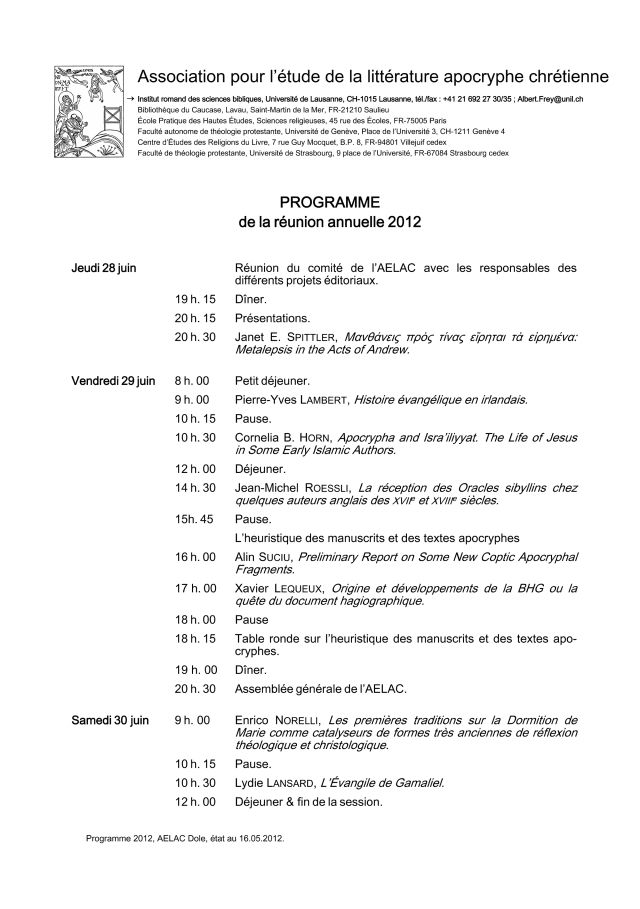 In July 2009, Sotheby’s auctioned ten fragments of Coptic parchment manuscripts from the White Monastery. These were purchased by the Bolaffi house in Turin. It seems that the Italian antiquities dealers then sold them on, the current whereabouts of the fragments being unknown. Several apocryphal writings have been identified in the Sotheby-Bolaffi lot: a fragment from the Acts of John, two fragments from the writings attributed to Evodius, the disciple of the apostle Peter, and two others from the sermons of Ps.-Cyril of Jerusalem which also contain apocryphal material. My presentation of the fragments shall touch upon their identification and on the reconstruction of the White Monastery codices to which they originally belonged.

2. New Fragments from the Coptic Version of Visio Pauli

The Coptic version of the Visio Pauli has been known to survive only in a Sahidic paper codex which was published by E.A. Wallis Budge in 1915. Two new fragments from a different Sahidic manuscript surfaced recently in a private collection.  These fragments can be dated on paleographical grounds to the 6th or 7th century CE, thus being the earliest testimony of the Visio Pauli. It is interesting to note that, unlike most of the other versions, which are written in the first person singular, the new textual witness recounts Paul’s visions in the third person singular. This rare feature has been attested, until now, only by some late Latin manuscripts.

It has been already established that Bruce Ferrini sold several fragments from codex Tchacos before the court obliged him to return the manuscript to Frieda Nussberger-Tchacos, its legal owner. Some of the fragments sold piecemeal by Ferrini have been introduced by Herbert Krosney, Marvin Meyer, and Gregor Wurst in a 2010 issue of the journal Early Christianity. Recently, during research carried on some small size collections of Coptic manuscripts, I identified several previously unknown fragments of the same codex. They belong to the writing conventionally called the Book of Allogenes, which immediately follows the Gospel of Judas in Codex Tchacos. One of the fragments is especially interesting as it has helped us to recover some of the opening lines of this gnostic text.

I am a researcher at the Göttingen Academy of Sciences and Humanities. I write mostly on Coptic literature, Patristics, and apocryphal texts.
View all posts by Alin Suciu →
This entry was posted in Uncategorized and tagged AELAC, Alin Suciu, apocrypha, Codex Tchacos, conferences, Coptic Manuscripts, Dole, Sotheby's, Visio Pauli. Bookmark the permalink.