It was a nice surprise to discover a few days ago that the National Library in Paris put up on the Gallica website photographs of some of the Sahidic parchment fragments in their possession. More precisely, they have uploaded until now good quality reproductions of BnF Copte 161(6), fol. 36-44. It’s not much yet but it’s a start.

I suspect that the fragments included in BnF Copte 161(6) were donated to the library in Paris by the papyrologist Seymour de Ricci. It appears that they came from the Monastery of Apa Shenoute (aka the White Monastery) in Upper Egypt.

As most of the fragment available at Gallica have not been identified until now, here are some hints that may be helpful: 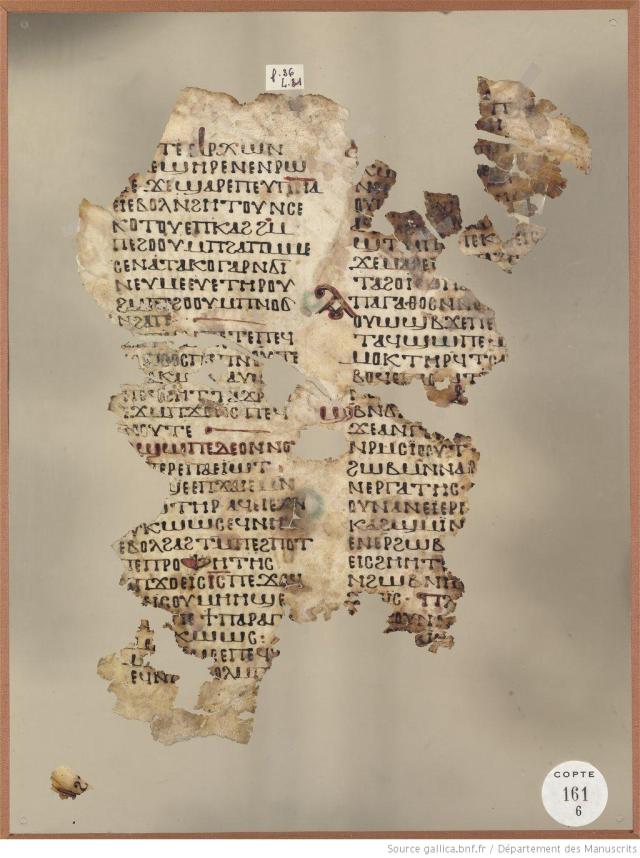 fol. 36 = Life of Shenoute attributed to Besa (BHO 1074-1078; clavis coptica 0461). I identified this fragment in an article to be published in the Zeitschrift für Antikes Christentum; 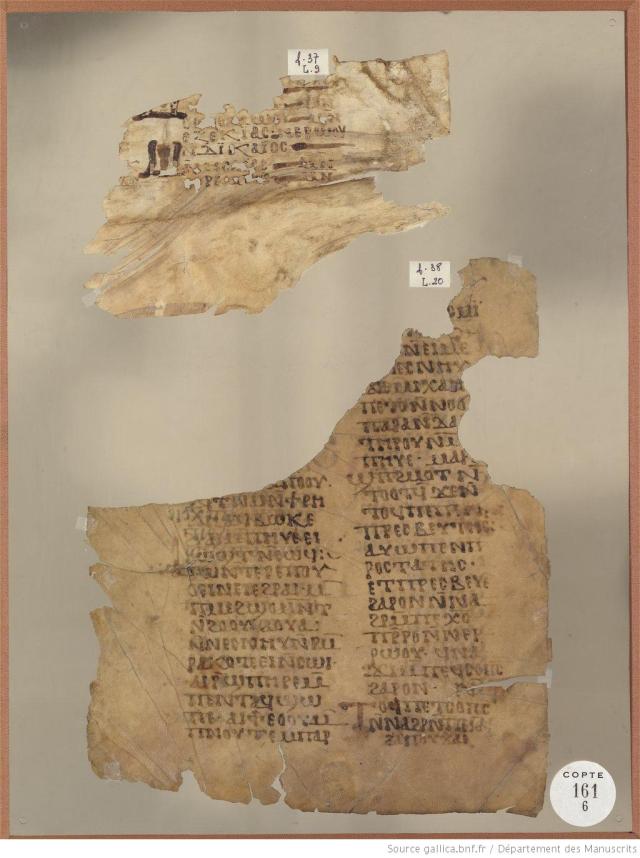 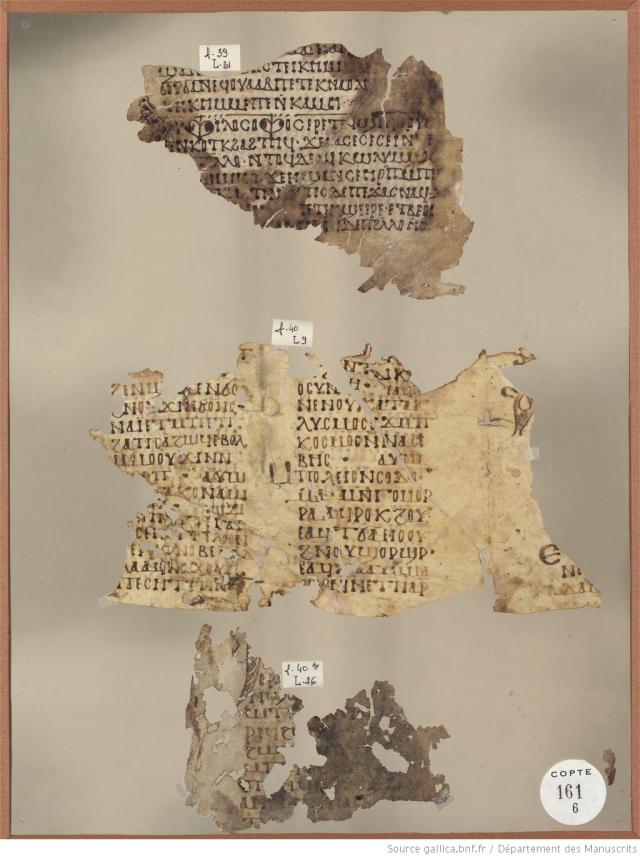 fol. 39 = sayings of the philosophers. Similar fragments in W. Till, “Griechische Philosophen bei den Kopten,” in MIFAO 67 (1934-1937) 165-175. This fragment came from a codex (MONB.BE) which contains sayings of the Greek philosophers and of the Fathers, but also homilies, letters, ascetic works etc.; 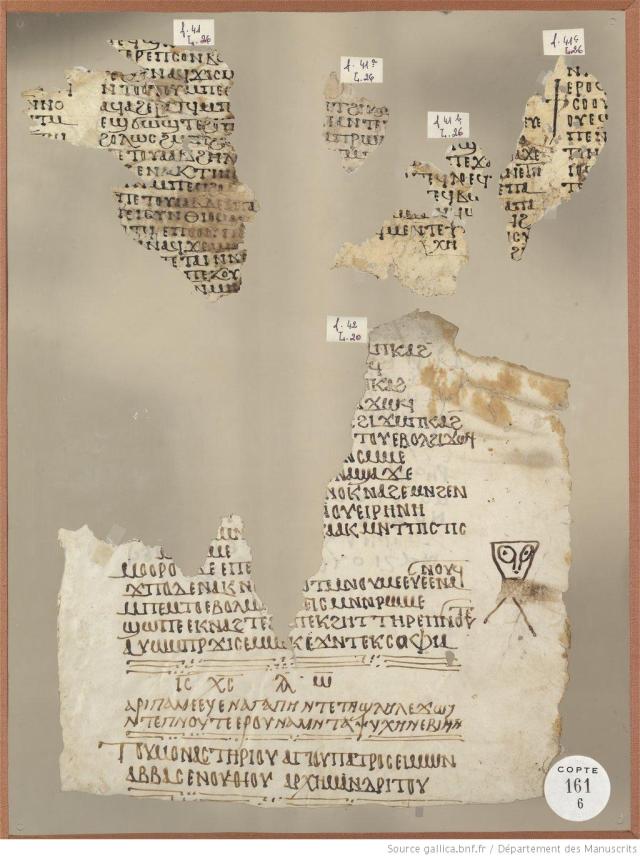 fol. 41 = It is not easy to decide if these fragments belong to the Encomium on Pisenthius by Moses of Keft (clavis coptica 0238) or to that of John the Presbyter on the same saint (clavis coptica 0187), because the largest fragment corresponds to both of them (the two encomia are parallel almost word for word at this point). However, my guess is that they came from the encomium of Moses of Keft. This text is fully preserved in a Bohairic manuscript in Vatican. In 2005, a Polish archaeological team discovered at Sheikh Abd el-Gurna in Western Thebes a codex which contains the Sahidic version of the text. The edition is prepared by Renate Dekker (Leiden University). If my guess concerning the identification of the fragments above is correct, I hope that Renate will integrate the Paris material in her edition.

The largest fragment parallels the Bohairic text of the encomium of Moses of Keft published in E. Revillout, “Vie de S. Pesunthius, évêque de Coptos,” Revue égyptologyque 10 (1902) 165-168, at 166b-167a, and also that of John the Presbyter published in E.A. Wallis Budge, Coptic Apocrypha in the Dialect of Upper Egypt (London: British Museum, 1913) 75-126, at 79-80. Furthermore, an Arabic text on Pisenthius published by De Lacy O’Leary also contains the episode on the verso of the largest Sahidic fragment:

“And when the brother entered he asked a blessing from both of them, and he  drew back and was unable to look directly upon the face of Elias because of  the rays of light radiating from his countenance, for he shone like the lightning, as it is written, “The righteous shall shine like the sun in the kingdom of their father’.” Then the holy father Pisentius was angry with the brother saying: “This is not the good manners of monasticism and the ways of the brethren, to enter without permission” (transl. De Lacy O’Leary in Patrologia Orientalis 22 (1930) 341.

fol. 42 = Fragment of Proverbs 2:21-3:5 and scribal note. Subscription in Greek: “of the monastery of our holy Father Abba Shenoute the Archimandrite”; 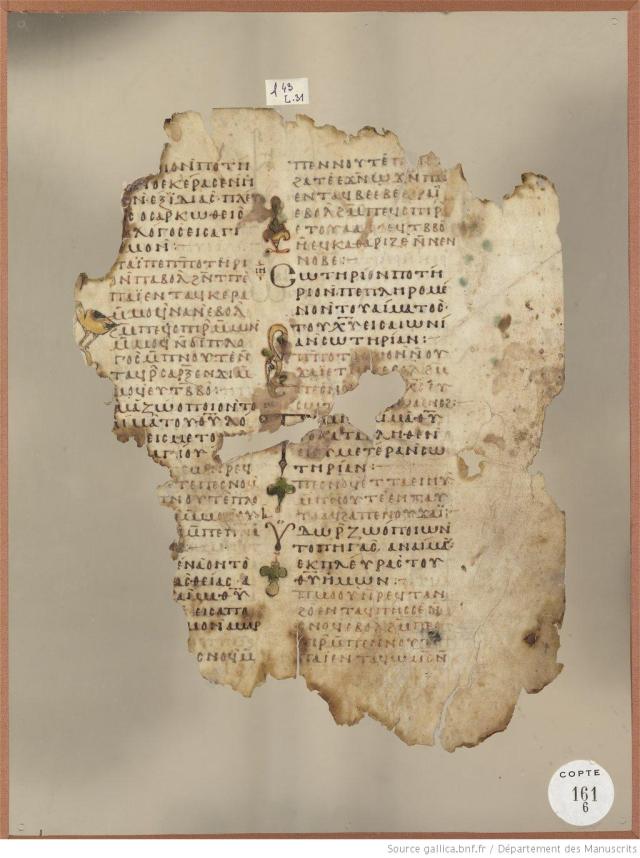 I am a researcher at the Göttingen Academy of Sciences and Humanities. I write mostly on Coptic literature, Patristics, and apocryphal texts.
View all posts by Alin Suciu →
This entry was posted in Bible, Encomium on Pisenthius, New Testament, Shenoute of Atripe and tagged Alin Suciu, Bibliothèque nationale de France, Coptic literature, Coptic Manuscripts, Encomium on Pisenthius, John the Presbyter, Moses of Keft, Renate Dekker, Seymour de Ricci. Bookmark the permalink.

5 Responses to Photographs of White Monastery Fragments on Gallica Website