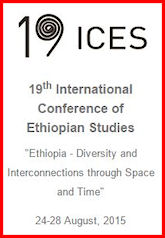 I got the following announcement from Timothy B. Sailors.

As part of the 19th International Conference of Ethiopian Studies, to be held from 24-28 August, 2015, at the University of Warsaw, Poland, a panel on ‘Early Christian Literature Preserved in Classical Ethiopic (Ge’ez)’ is being organized by Timothy B. Sailors (Tübingen).

The description of the panel from the call for papers is as follows:

One of the more important sources for the study of early Christian literature are the versions of these writings preserved in Classical Ethiopic (Ge’ez). This panel will provide the opportunity to focus upon the all too often under-appreciated Ge’ez versions of these works of literature originally composed in the first several Christian centuries. These include books that would come to be part of the Christian Bible, writings categorized among the so-called ‘Apostolic Fathers’ or ‘Apologists’ or ‘Church Fathers’ and so-called early Christian ‘Apocrypha’, consisting, for example, of apocalypses, acts of apostles and testaments. Moreover, many of the ancient church orders from this era are importantly preserved in Ge’ez versions, as are other writings of a monastic, didactic or legendary nature.

Some writings from this period are preserved exclusively in Ge’ez, while others are also extant – at least in part – in Greek or in other ancient translations or versions, and papers offered for this panel may examine the relation of the Ge’ez to these other witnesses.

Proposals are welcome too for contributions that investigate the historical, religious and cultural settings in which the Ge’ez versions of this literature were produced, transmitted and preserved. Papers may also give attention to the material evidence for these processes by examining codicological or palaeographical aspects of the manuscripts that contain this literature, or by considering extracts from these works in florilegia in Ge’ez. Of interest too might be the immediate literary context within the manuscript tradition, i.e., with which other writings is a work transmitted or combined? Panellists may also ask whether the content of the Ge’ez version itself presents any specific or unique philological, literary, historical or theological features to which one’s attention should be drawn.

The call for papers has been extended and is open until 15 December 2014. Paper proposals must be submitted via the official conference website.

I am a researcher at the Göttingen Academy of Sciences and Humanities. I write mostly on Coptic literature, Patristics, and apocryphal texts.
View all posts by Alin Suciu →
This entry was posted in Announcements and tagged Announcements, Congress, Early Christianity, Ethiopic, Ge'ez, Timothy B. Sailors, Warsaw. Bookmark the permalink.