New book by one of the greatest historians of the Egyptian church:

… a description of the hierarchical Church, its framework and machinery. The word ‘description’ is somehow too narrow to express what I would like to present, for my ambition is to show how the ecclesiastical institutions functioned. What I aim at is a picture of the Church ‘in motion’. I will try to discover the mechanisms of cooperation between the three levels of the hierarchic pyramid: the patriarch and his curia, the bishops, and the remaining clergy subordinate to the latter.
I believe that I am able to sketch (at least in part) the mentality of the members of hierarchical Church, to reconstruct the procedure of appointment of bishops and to give an account of the creation of the network of churches.
(…) My intellectual adventure with the history of the Church began with research on ecclesiastical economy, incomes and the manner of their administration, expenditures, and the material status of the clergy. The choice of these subjects was absolutely natural to me, since my academic education had provided me with a solid background for tackling such issues; I had also learnt much while preparing my doctoral dissertation on the textile industry of Roman Egypt. In spite of having enough reasons to find the results of my previous research satisfactory, I did not want to explore the subject any farther. It was late antique Egypt that captivated me – a fascination I owe to my French papyrology teacher, Roger Rémondon. Within this realm I found the Church and monasticism particularly intriguing.
(from the Preface)

Table of contents
Preface . 3
Chapter One . 9
Church historians – 10. Historians of the Alexandrian Church – 22. Normative texts – 27.
Church archives of documents on papyrus – 34 (The archive of Abraham – 34. The archive of Pisentius – 37).
Chapter Two
The origins of monarchic episcopate in Egypt . 43
The bishops of Alexandria – 43. The bishops of Egypt – 60.
Chapter Three
The Great Persecution in Egypt: new sources, new hypotheses . 75
New sources – 75. The beginnings of the Great Persecution: an attempt at a reconstruction -76. The number of victims of the Great Persecution in Egypt – 92. Appendix
A: Chronology of the history of Christian Egypt in the times of the Tetrarchy and Constantine – 95. Appendix B: Victims of persecutions in Egypt according to Eusebius – 98. Appendix C: On the governor’s jurisdiction during the Great Persecution in Egypt – 99.
Chapter Four
The institutional church of Egypt AD 325-700: an overview . 107
Chapter Five
The episcopal elections . 127
Introduction – 127. The elections of bishops in the Egyptian chora – 129. The elections of
bishops in the Pentapolis – 146. The elections of the patriarch and their rules – 149. Conflictual elections of patriarchs -154.
Chapter Six
Constantine’s policy towards the church. The subvention for clergy, church-building programme, fiscal privileges . 171
Chapter Seven
The payroll of the clergy . 195
Chapter Eight
The economy of the Alexandrian patriarchate in the Lives of John the Almsgiver . 209
Chapter Nine
The people of the Alexandrian patriarch . 237
Chapter Ten
The patriarch of Alexandria and his bishops . 271
Chapter Eleven
The bishop and his clergy . 305
The ordination of clergy – 308. Requirements concerning the members of the clergy – 321. Means of disciplinary punishment at the bishop’s disposal – 324. The clerics’ preparation to fulfil their liturgical functions – 325. What do we know and what do we not know about the  liturgical service? – 327. The hierarchical order in the clergy – 330. Appendix A: Chosen examples of churches in Egyptian cities, towns, and villages – 335. Appendix B: Lighting of
the churches’ interior (by Tomasz Górecki) – 343.
Chapter Twelve
The bishop’s philanthropic activity . 349
Chapter Thirteen
The church treasures of Byzantine Egypt . 365
Chapter Fourteen
Churches in a city: The case of Ptolemais in Cyrenaica . 377
Character of the basilicas of Ptolemais and interpretation of their location in the city – 380. Buildings associated with the churches – 388.
Final remarks . 415
Appendix
Alexandrian bishops from the patriarchate of Demetrius to the end of the seventh century . 439
Bibliography . 441
Indices . 467 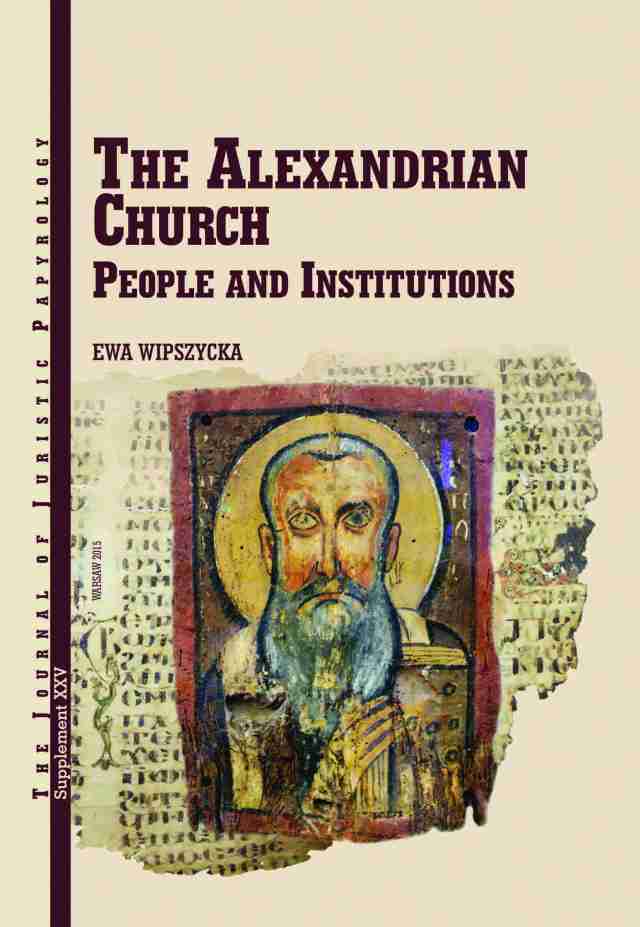 I am a researcher at the Göttingen Academy of Sciences and Humanities. I write mostly on Coptic literature, Patristics, and apocryphal texts.
View all posts by Alin Suciu →
This entry was posted in Announcements and tagged Books, Ewa Wipszycka. Bookmark the permalink.

1 Response to Ewa Wipszycka, The Alexandrian Church. People and Institutions