In July 2009, during a research visit at the Papyrussammlung of the National Library in Vienna, Cornelia Römer drew my attention to ten Coptic parchment fragments that were on offer by Sotheby’s at that time. As Dr. Römer was the director of the papyrus museum, she was willing to acquire the fragments for the Viennese collection, but eventually I found out that they had been purchased for 28,750 GBP by Bolaffi, the Italian antiquity dealers based in Turin.

Since then, I posted on my blog several articles on what I called the “Sotheby’s fragments” (for example here and here). I would like to discuss again one of them, which was identified as part of the Coptic translation of the Scholia on the Incarnation of the Only Begotten by Cyril of Alexandria.

Here is the report on the fragments in question, posted on Sotheby’s website:

10 fragments of varying sizes: (1) a near complete leaf, 335mm. by 261mm.; (2) (3) & (7) substantial fragments of leaves approximately 240mm. wide, (4) & (6) large sections of single columns; the remainder small pieces approximately 60mm. across; written space of (1) 255mm. by 165mm, double column, with 31 lines in black ink, capitals within the text touched in red, those beginning significant sections with clubs at the end of their terminals, dots within their bodies and outlined in red, vellum dry and brittle in places, many tears to outer edges of leaves, but in good and presentable condition.

Sotheby’s claimed that all the fragments auctioned came from the same ancient manuscript. However, after receiving a set of pictures from Bolaffi, the new owners of the fragments, I realized that they come in fact from different codices.

The only picture available on Sotheby’s website shows the verso of the best-preserved leaf, which I conveniently called “Sotheby’s 1.”[1] The little amount of text which I could obtain in 2009 from the picture posted on the website, already suggested a possible author. The fragment calls Christ Logos, Emmanuel and Only Begotten and discusses the relationship between his divinity and humanity. This issue represented the main controversy during the Nestorian crisis and was often debated by Cyril of Alexandria. Indeed, “Sotheby’s 1” can be safely identified as a portion from Cyril’s Scholia on the Incarnation of the Only Begotten (CPG 5225),[2] a dogmatic work central to the Christological debates of the 5th century. Unfortunately, the scholia survived only partly in Greek, but their text is recoverable from the translations made into Latin and various languages of the Christian Orient.[3]

These are the pictures of the fragments, which the Bolaffi house kindly sent me: 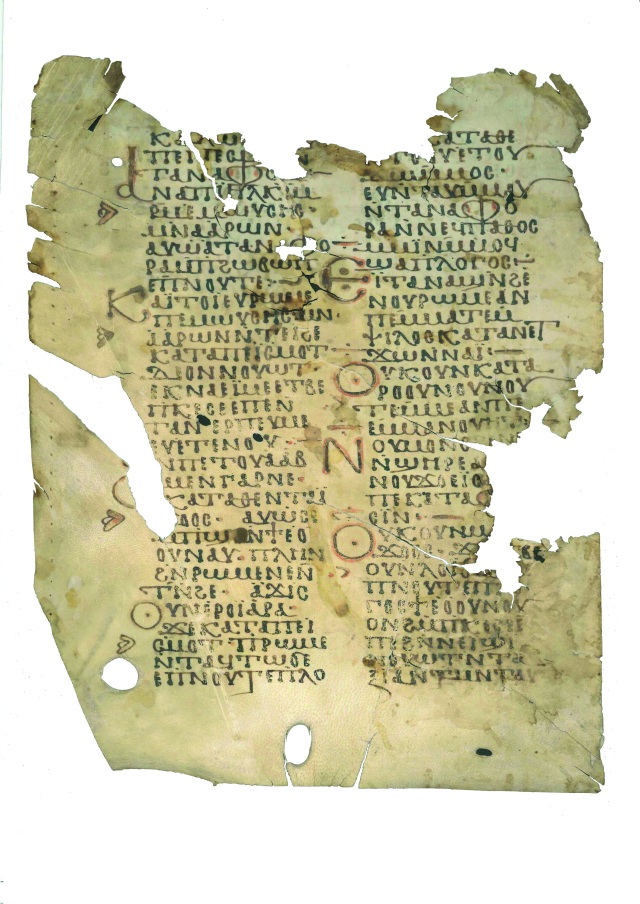 “Sotheby’s 1” originally belonged to a White Monastery codex which is divided among several collections. Other fragments from the same codex have been identified some time ago by Enzo Lucchesi.[4] The seven fragments found by Lucchesi are completed by a supplementary folio, previously unidentified, kept in the National Library in Vienna (call number K 9580).

Adding the newly recovered fragments, we can attempt to revisit the structure of the codex which contained Cyril’s scholia:

Although no page numbers have survived on “Sotheby’s 1,” its position in the original codex is not difficult to establish since the verso corresponds to the final part of the Scholia on the Incarnation.

[1] The picture is available on Sotheby’s website at http://www.sothebys.com/app/live/lot/LotDetail.jsp?lot_id=159542226.

[2] The Greek fragments of the Scholia on the Incarnation are available in PG 75, coll. 1369-1412; the complete ancient translation in Latin is printed in PL 48, coll. 1004-1040. The standard edition is that of E. Schwartz, Acta Conciliorum Oecumenicorum vol. I.5.1 (Berlin – Leipzig: Walter de Gruyter, 1924), which gives both the Greek fragments and the Latin text. There is a relatively recent translation in English in J. A. McGuckin, St. Cyril of Alexandria: The Christological Controversy. Its History, Theology, and Texts (Supplements to Vigiliae Christianae, 23; Leiden – New York – Köln: E. J. Brill, 1994) 294-335.