According to David A. deSilva, 4 Maccabbees: Introduction and Commentary on the Greek Text in Codex Sinaiticus (Leiden/Boston: Brill, 2006), xi, there are two most important witnesses to the Greek text of 4 Maccabees, Codex Sinaiticus and Codex Alexandrinus. deSilva also admits that the Peshitta version ‘carries significant weight in textual criticism of 4 Maccabees.’ Curiously enough, no other ancient version of the text is mentioned by deSilva at all.

Still, there is at least one Sahidic manuscript of 4 Macc, briefly described in two notes by Enzo Lucchesi (‘Découverte d’une traduction copte du Quatrième livre des Maccabées (BHG 1006),’ Analecta Bolandiana 99 (1981): 302; ‘Encore trois feuilles coptes du Quatrième livre des Maccabées,’ Écritures et traditions dans la littérature coptes, journée d’études coptes, Strasbourg 28 mai 1982 (Louvain, Belgique: Éditions Peeters, 1983), 21-22). The manuscript is incomplete, and the fragments that survive cover the first and the last chapters of the text. The fragments of the first chapter belong to the Bibliothèque nationale de France, the fragments of the last ones belong to the library of the University of Michigan. My and Alin’s intention is to publish all the Sahidic fragments of 4 Maccabees that are known so far. 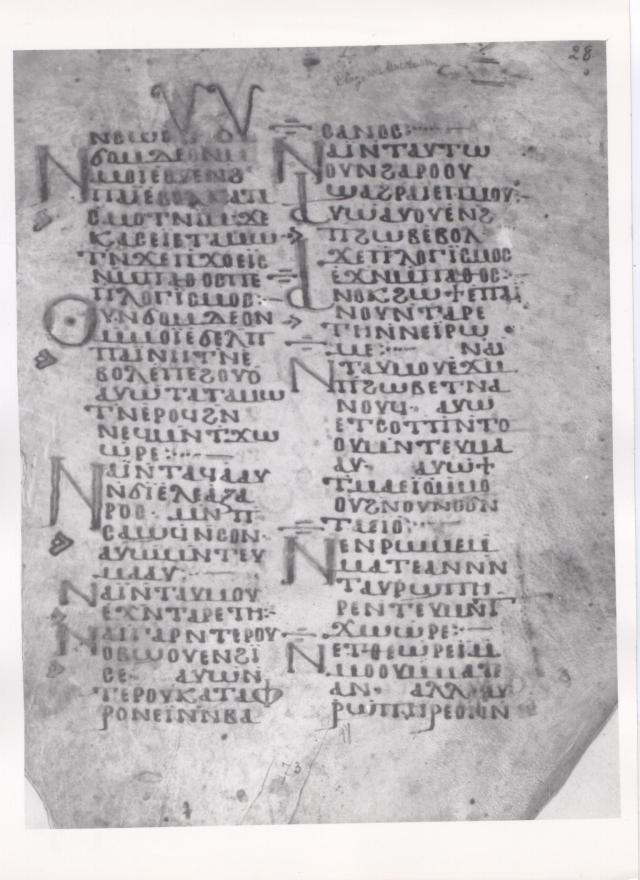 The Coptic fragments might probably shed some new light on the textual criticism and the reception history of 4 Maccabees. Below is my transcription and translation of the only undamaged leaf (BnF, 1313 f. 28) of once-upon-a-time complete codex. The leaf covers 4 Macc 1:6-16. As one might see, the Sahidic text sometimes significantly differs from the Greek original. This indicates either that the Vorlage of the Coptic translation was different from the Greek text we have today, or that the Coptic translator worked quite freely. E.g. the Greek text does not mention the tortures in v.9, as well as the ones who saw the martyrs in v.11 and the various sorts of reasoning in v.14. The interpretation of v.15 in the Coptic translation is also quite interesting.

Any critical comments with regards to the project in general or/and the translation in particular will be deeply appreciated.

Excerpt from the edition with translation:

them. 7 And (δέ) also I am able to reveal this in every way (+κατά) in order to demonstrate you that the reason (λογισμός) is the lord of the passions (πάθος). 8 And (δέ) also I am able to show this to you greatly and to demonstrate this to you by his feats, the ones that Eleazar accomplished with the seven brothers and with their mother. They died for the sake of the virtue (ἀρετή). 9 For (γάρ) when they disregarded the suffering and despised (καταφρονέω) the tortures (βάσανος), they bore it even to death. And they revealed that the reasoning (λογισμός) is over the passions (πάθος). 10 I, for my part, commend (ἐπαινέω) the virtue (ἀρετή) of these people. They and their mother died for the thing that is good and chosen. And I praise them with great honor. 11 Not only the people that were amazed by their feat, not only those who saw (θεωρέω) them, but (ἀλλά) also those who tortured (βασανίζω) them were amazed. And also they became a reason to destroy (καταλύω) the tyranny (-τύραννος) that fought against their nation (ἔθνος). They overcame the tyrant (τύραννος) so that (ὥστε) they purified their homeland (πατρίς) by their feat. 12 And (δέ) if I am about to tell the story (ἱστορία) of what happened to them, I will narrate the whole thing the way (+κατά) I occasionally do it. And (δέ) I will give glory to God, to the one who is wise (σοφός) in everything, and in this way I will speak about their endurance (ὑπομονή) again. 13 And (δέ) now I ask whether the reasoning (λογισμός) is the lord of the passions (πάθος). 14 Let us separate them one from another and understand how many kinds of reasoning (λογισμός) there are and how many passions (πάθος) there are and whether the reasoning (λογισμός) is the lord for all of them. 15 What is the mind (νοῦς), therefore, that stands because of upright reasoning (λογισμός)? It honors the life (βίος) of the wisdom (σοφία). It grants that she is the first. 16 The wisdom (σοφία), for its part, is the [knowledge (γνῶσις)]

Ivan Miroshnikov (b. 1986) is a Ph.D. student at the Department of Biblical Studies, Faculty of Theology, University of Helsinki. His detailed CV is available here.

2 Responses to Guest Post: Ivan Miroshnikov on 4 Maccabees in Coptic