A Solved Riddle: The Authorship of a Coptic Encomium on the Archangel Gabriel

In a previous blog post (August 2011), I drew attention to the editio princeps of P. Vindob. K 9670, a parchment leaf in Vienna which had been published by Hans Förster in a recent issue of the Zeitschrift für Antikes Christentum.[1] The text of the fragment belongs to an encomium on the Archangel Gabriel, which I was not able to identify. In my post, I merely remarked that another fragment of the same codex is preserved in the National Library in Vienna. Thus, I showed that P. Vindob. K 351 and the fragment published by Hans Förster originally formed a single bifolio. 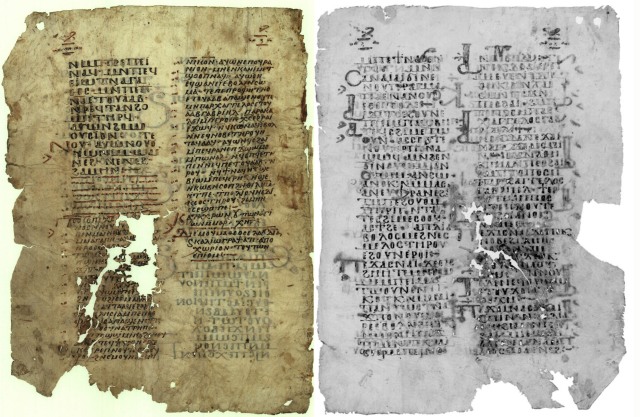 This sheet used to be the outermost bifolio of the seventh quire of the codex. It is interesting to note that the verso of K 351 contains a colophon which says that the manuscript was copied by the scribe Matthew of Touton (in the Fayyum) in the year 656 of the Era of the Martyrs (= A.D. 939-940).

Now, more information has recently been presented by Enzo Lucchesi in an article published in Analecta Bollandiana.[2] Lucchesi identified independently, not only the fragment K 351, but also pointed out that there is another fragment in the National Library in Paris which parallels the text of Vienna K 9670. Thus, we now know two manuscript witnesses of the same encomium. But, more importantly than that, Lucchesi solved the riddle of the authorship, indicating that the fragments come from an Encomium on the Archangel Gabriel which is preserved in Arabic under the name of John Chrysostom. We have, therefore, a new text to add to our Coptic clavis.