My thanks to David Tibet for his kind help

NOTE: I introduced for the first time the Tchacos fragments discussed below during the annual reunion of the Association pour l’étude de la littérature apocryphe chrétienne (AELAC), which took place June 28-30, 2012, in Dole, France. More recently, Gregor Wurst mentioned them as well in his report on Gnosticism, which he delivered in Rome at the Tenth International Congress of Coptic Studies (September 17-22, 2012). I am currently preparing together with Louis Painchaud (Université Laval, Québec) an edition of the fragments.

For the last couple of years, I have been picking through some little-known collections of Coptic manuscripts. Moreover, I have also been trying to locate fragments of Coptic manuscripts in private collections. Although my main purpose was to find parchment fragments from the Monastery of Apa Shenoute (also called the White Monastery) for our Corpus dei manoscritti copti letterari  project, from time to time other unexpected things surfaced.

I shall briefly present here one such surprising discovery, which occurred recently.

Not so long ago, I found out that the Lafayette College in Easton, Pennsylvania, possesses, among other Egyptian antiquities, two Coptic papyrus fragments. As I was curious enough to know what they were, I asked the staff for more details about them. In this way I came to know that despite the fact that the fragments have been labeled as “Egyptian Gospel Books,” actually they do not belong to any of the canonical Gospels. The first thing that struck me when I read the papyrus fragments was the occurrence of a Middle Egyptian dialectal form in the Sahidic text, which is very rarely found in the manuscripts I usually investigate. This was already curious enough to make me think it could be something interesting. But, more importantly than that, very peculiar paleographical features suggested that the papyri could belong to Codex Tchacos.

Perhaps you remember the impact this manuscript had in the media in 2006, mainly due to the fact that it contains the now famous Gospel of Judas. Indeed, the comparison of the two Lafayette fragments to the facsimile of Codex Tchacos published by National Geographic confirmed that they are paleographically related. Moreover, the largest of the fragments shares with several fragments of Codex Tchacos a similar damage pattern. In papyrology, if we find more pieces of the same manuscript which exhibit a similar damage pattern, it usually means that they belonged to successive leaves which suffered the same kind of erosion due to their proximity in the codex.

Codicologically, it appeared to me that the largest fragment belongs to pages 59/60 of Codex Tchacos. Here is a digital reconstruction of page 60 (the Lafayette fragment is the dark one): 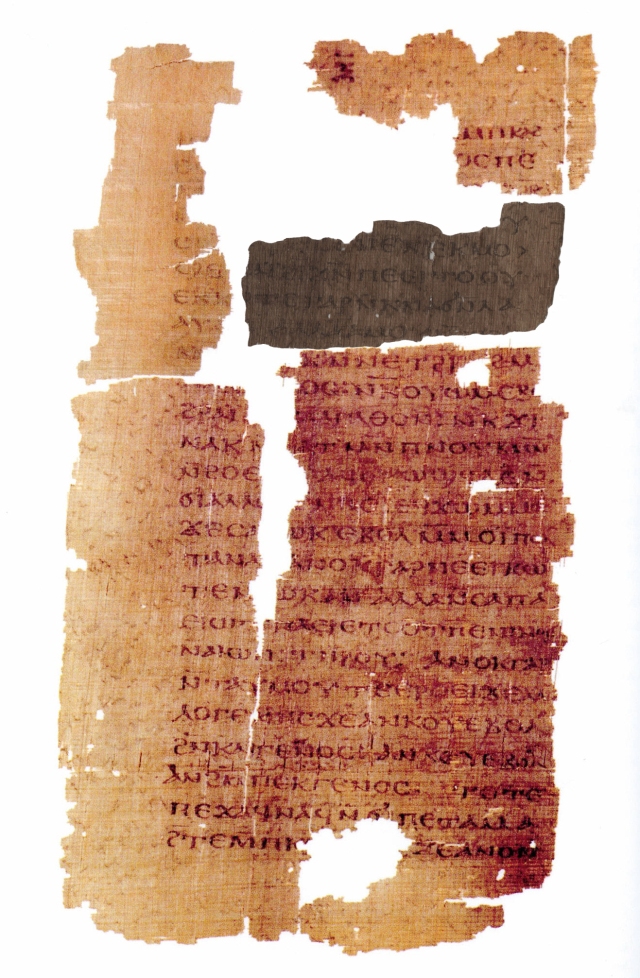 As the Gospel of Judas ends on the previous page, that is, 58, the new Lafayette fragment belongs to the Book of Allogenes, which begins on page 59 of the manuscript. Unfortunately, the second fragment is quite small and, consequently, difficult to place codicologically, even though its content would also suggest that it belonged to the Book of Allogenes.

Allogenes (the Stranger) is the fourth treatise in Codex Tchacos. It is possible that this text, along with the apocalypse of Allogenes in Nag Hammadi Codex XI, are amongst the books called Allogenes mentioned by Epiphanius in Panarion 40.2.2, 39.5.1 as being used by the Archontic Gnostics.

But how did the fragments end up in the collection of the Lafayette College? According to the information graciously provided to me by Diane W. Shaw, Director of Special Collections and College Archivist, the two papyrus fragments were donated to the college in 2005 by the father of one of the graduates. The donator purchased them, in his turn, from Bruce Ferrini, the well-known rare book dealer, who died suddenly in 2010. We know that Ferrini bought the entire Gospel of Judas codex in 2000 from Frieda Nussberger-Tchacos, but, as he could not pay for it, he was later obliged by order of the court to return it to her. There is evidence that Ferrini did not return the entire manuscript, but kept parts of it for himself, which were eventually sold to different individuals. All these issues were documented recently in the excellent article by Herbert Krosney, Marvin Meyer and Gregor Wurst, “Preliminary Report on New Fragments of Codex Tchacos,” Early Christianity 1 (2010) 282-294. Similarly, Gregor Wurst’s website is occasionally updated with photographs of new fragments.

The Lafayette fragments confirm once again that Ferrini sold separately pieces from Codex Tchacos. It is therefore quite likely that other parts of the manuscript are still in the possession of unknown institutions or private collectors. A few years ago, I personally met such a private collector who claimed to own several very small fragments of the codex in question. Upon examination I realized that the fragments did indeed come from Codex Tchacos, but, unfortunately, they are far too tiny (usually containing one or maybe two letters on each side) to be of real use. However, I do think it is possible that other fragments of significant size may surface in the future. We should therefore remain vigilant.

I am a researcher at the Göttingen Academy of Sciences and Humanities. I write mostly on Coptic literature, Patristics, and apocryphal texts.
View all posts by Alin Suciu →
This entry was posted in Apocrypha and tagged Alin Suciu, Allogenes, apocrypha, Bruce Ferrini, Codex Tchacos, Coptic Manuscripts, gnosticism, Lafayette College, Nag Hammadi, papyri, Papyrology. Bookmark the permalink.